It's easy even for beginners! Everyday use of Japanese umbrellas that looks like a fashionable expert

This is a must-see for those who think that Japanese umbrellas are wonderful but don't have the image of using them for themselves!
If you feel free to use a Japanese umbrella on clothes day, you will look like a casual and cool adult.
Rather than cherishing it because it is a traditional craft, please feel free to take it in every day. Directly from the store manager!
The basic key to incorporating Japanese umbrellas into everyday life Five "" that you can feel with a Japanese umbrellagood thing」

What are some good things about using a Japanese umbrella in the first place?

First of all, please try to pick up the real thing.
A beautiful space that spreads out the moment you open it.
With a patterned umbrella, it's like being inside a kaleidoscope. Just like a private planetarium.
Kawaguchi: "Unlike Western umbrellas and vinyl umbrellas that are covered with cloth, the diffusion of light is beautiful because it is Japanese paper."
The umbrella is made of Japanese paper coated with waterproof oil, so you can enjoy the feeling of sheerness even on rainy days.
More than 40 bamboo bones cast shadows at regular intervals, and beautiful overlock threads spread like flowers.
There is a dignified atmosphere.
Beauty born from actual products = "beauty for use". 2. People passing by look back

On the day you wear a kimono, you may feel the eyes of people passing by and feel a little superiority. That feeling.
Even if you can't wear a kimono casually (especially on a rainy day!), A Japanese umbrella can be a point of coordination on any clothing day.
Japanese umbrellas aren't cheap, but they're about the same price as coats and bags, and if you think about using them every day, you'll probably get the money.
I was also told by an elderly person, "When I was going to my wife, my mother had one."
It seems to be an opportunity for communication. 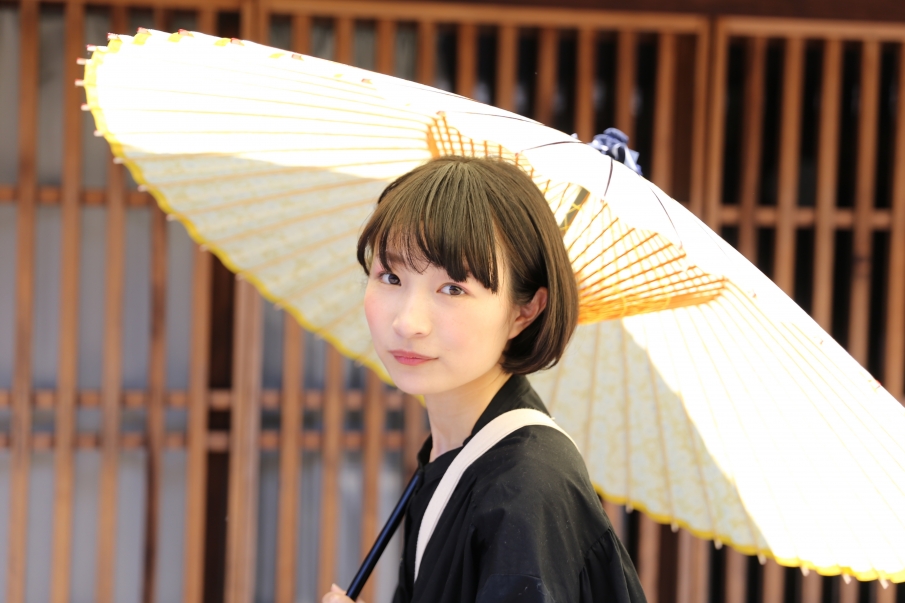 The sound of rain falling on Japanese paper called "paran".
The popping sound of a repellent when opening an umbrella.
Old-fashioned oil scents such as perilla oil and linseed oil.
The feel of lacquer applied to bamboo ...
I feel that the Japanese atmosphere makes my spine squeaky. 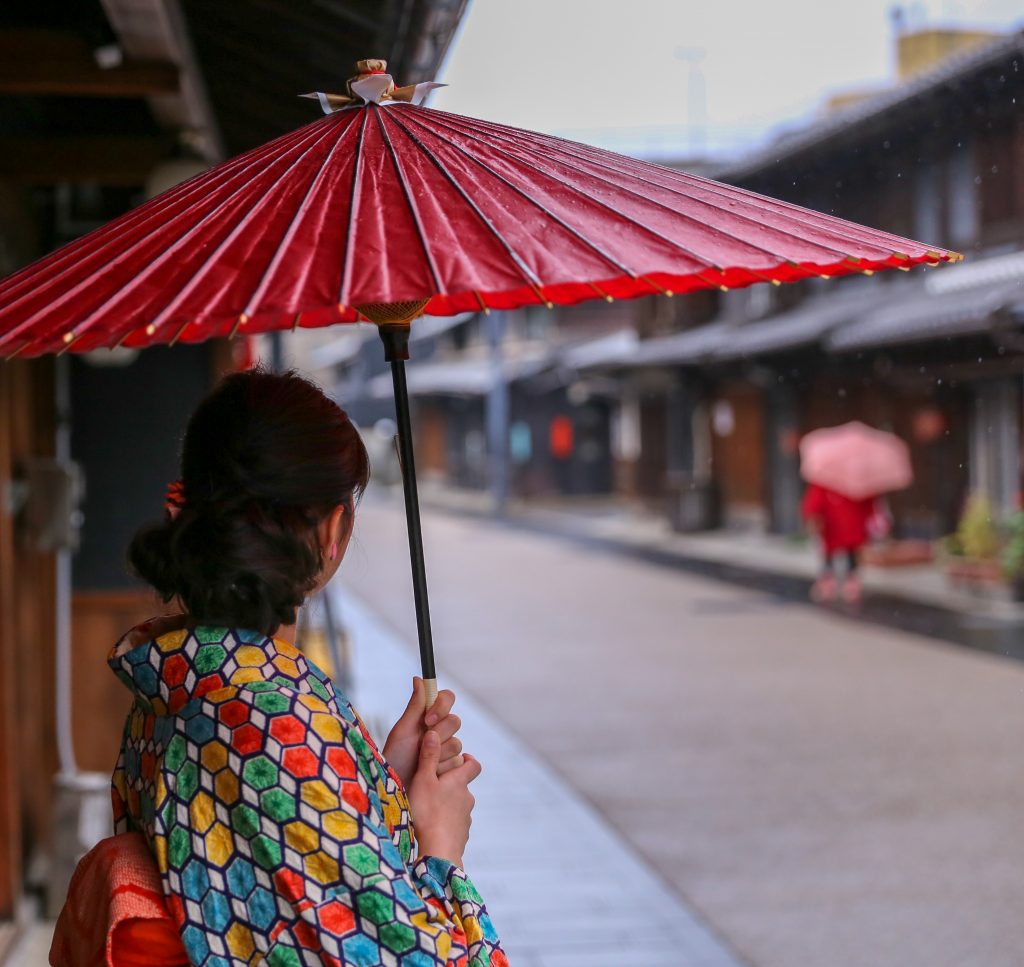 4. Feelings to use good things carefully

Rather than the sight of vinyl umbrellas being thrown away in the town the day after the typhoon, I want to feel like using one umbrella carefully.
Why don't you acquire the richness of having good things without saying "Umbrellas will be lost soon"?
Because there are people who use it, the technique of making Japanese umbrellas will be protected.
If you are proud of your hometown that Gifu has such a good thing in Japan, you may be able to take good care of yourself.

Kawaguchi: "Color, sound, and feel. I think there is fun that can only be experienced with a Japanese umbrella.
Isn't it always a little fun to have a gloomy rainy day? (Pride) " 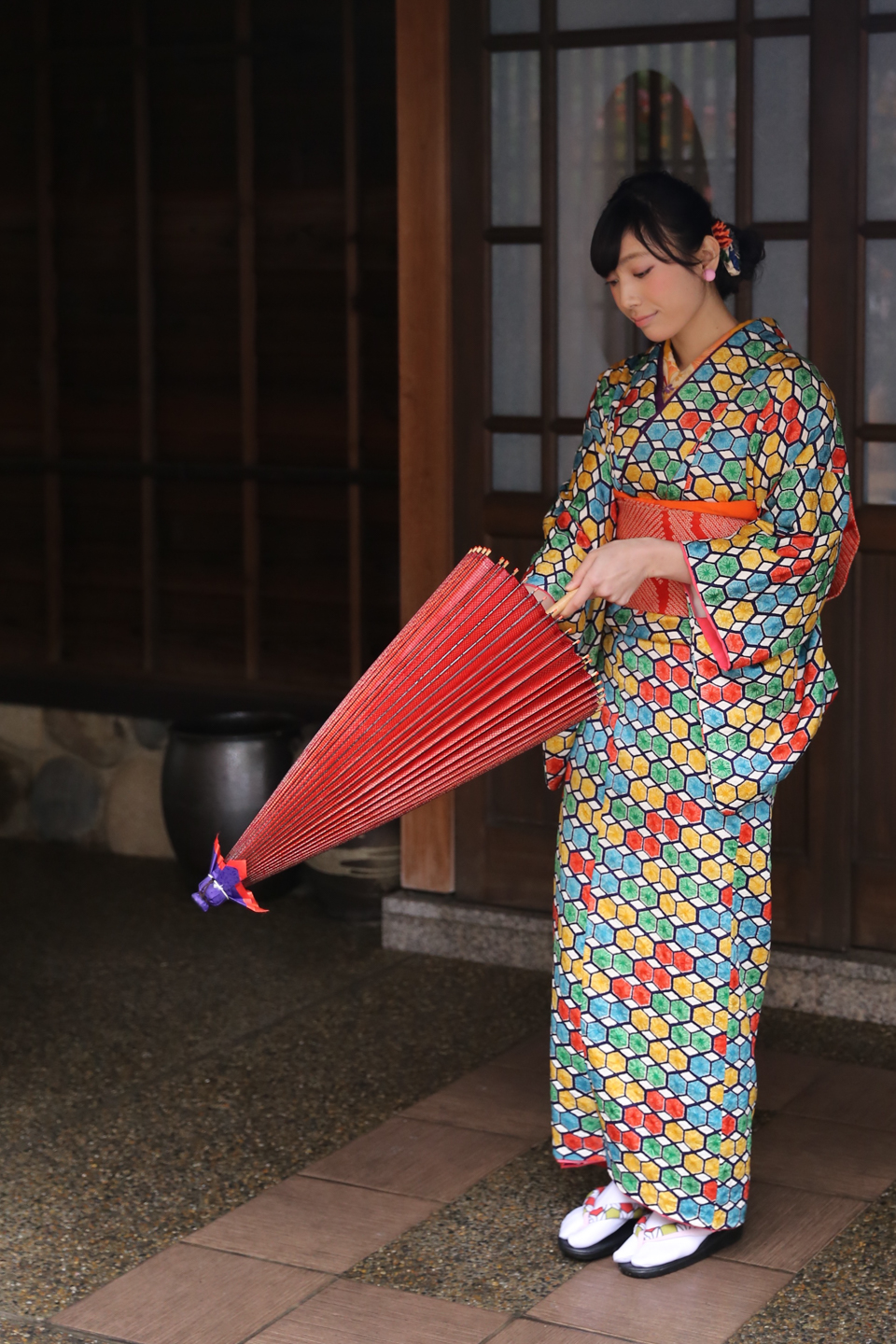 When usingTips to watch out for 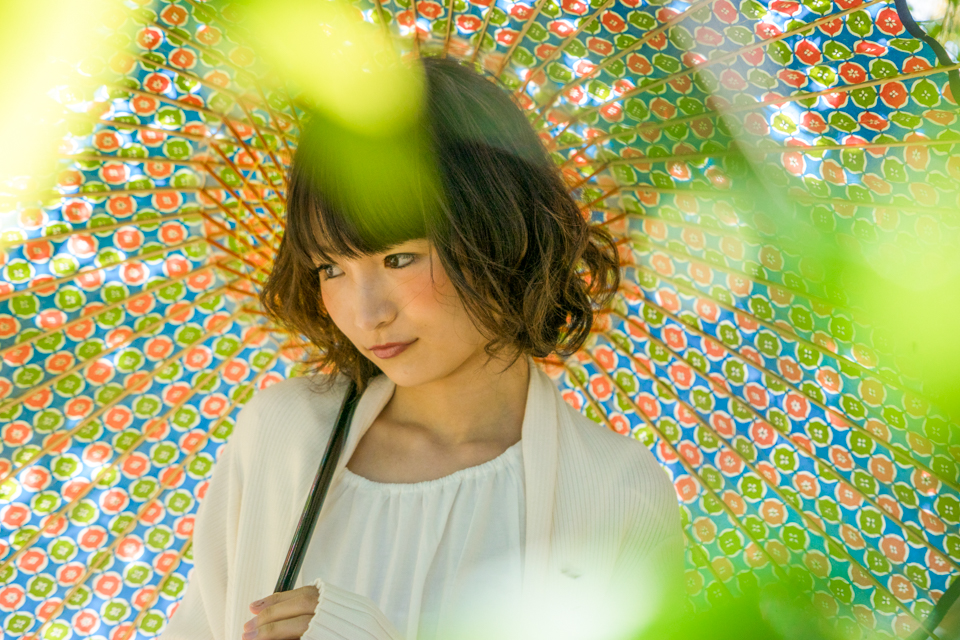 For those who say, "But if I use a Japanese umbrella on a regular basis, I'm likely to break it soon ...", here are some tips I would like you to keep in mind. 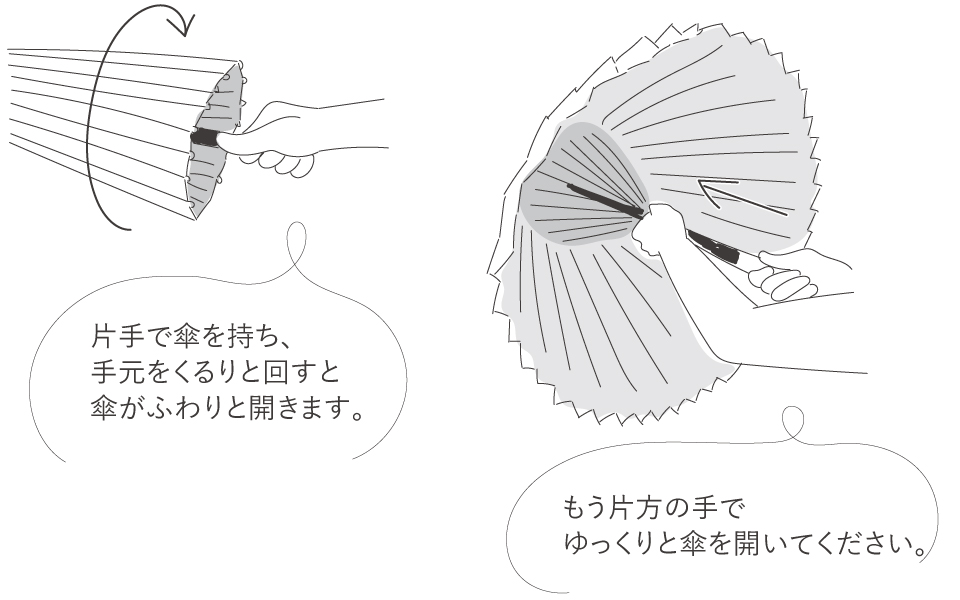 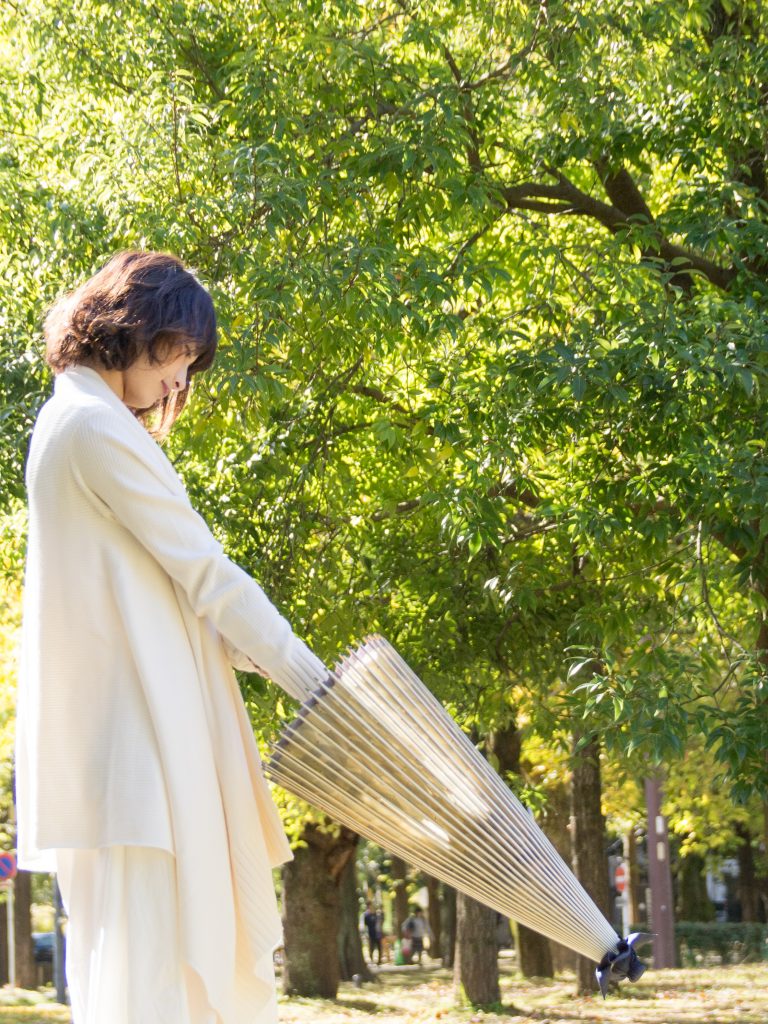 If you try to open it forcibly, the folded Japanese paper will become crunchy and the bones will be strained.
[Never open this way! ]
・ Swing around and open in the wind like a Kabuki actor
・ Push your hands into the closed area to open it.
If you learn how to open it smartly, it will not only last a long time, but it will look very familiar.

2. The Japanese umbrella is always on your head !! 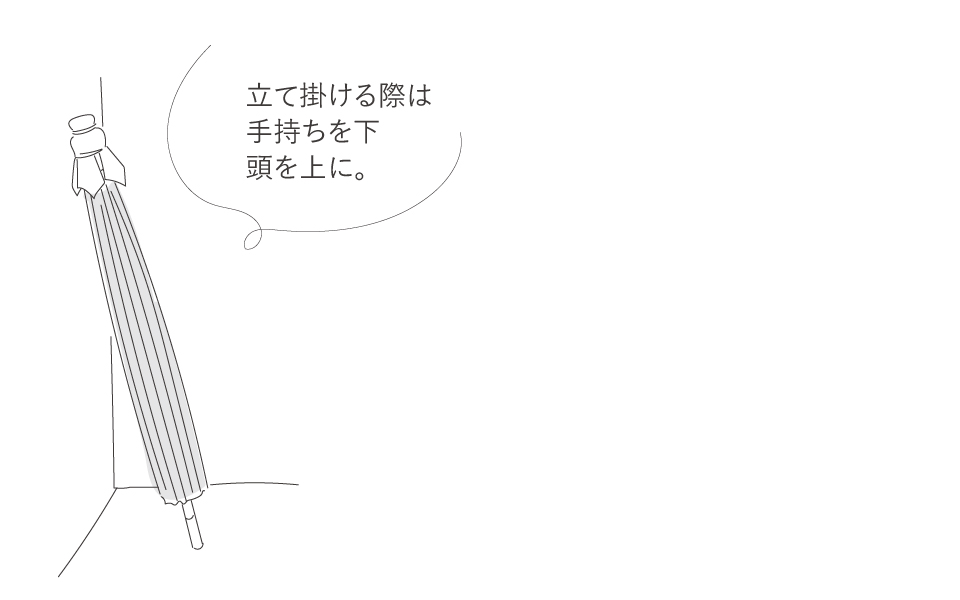 Japanese umbrellas are the opposite of Western umbrellas.
When leaning on an umbrella, keep your hand down and your head up.
There is a string on the head, so it is safe to hang it.
The most important part to protect for a Japanese umbrella is the top paper (Aiba). Here, there is a wooden part "Rokuro" that is the key to the umbrella by bundling the bamboo of the Japanese umbrella.
If the potter's wheel rots in rainwater or breaks due to impact, there is no way to repair it anymore.
Some have metal fittings at the bottom of the handle so that they can be placed on the ground.

3. Do not use on strong wind days 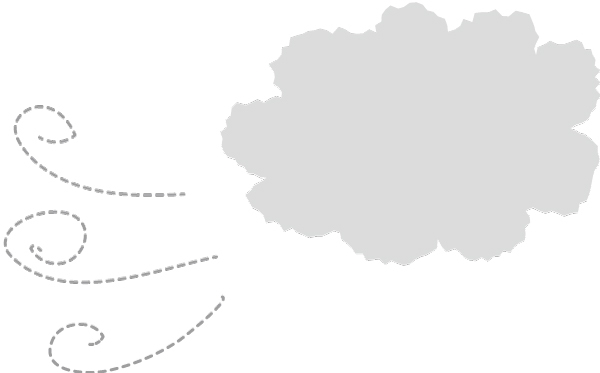 4. Do not expose the umbrella to direct sunlight for a long time

Kawaguchi: I'm often asked if I can use an umbrella as a sun umbrella, but since I'm oiling the washi, if I keep exposing it to the scorching sun, the washi will become crispy and easily torn. The washi will deteriorate. It is not recommended for those who want to use it as an umbrella for a long time. For sunny days, there is a sun umbrella that you can enjoy the texture of Japanese paper that does not draw oil. " 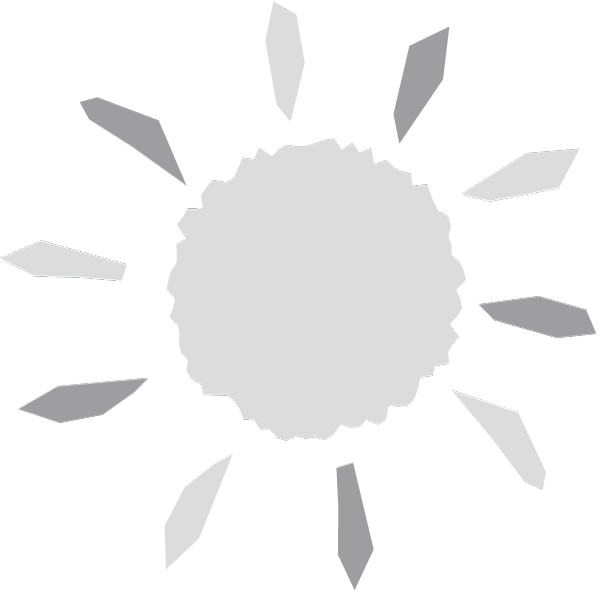 Do not squeeze the head of a wet umbrella. After use on a rainy day, open it halfway to fully open and dry it in the shade. As mentioned above, your head must be on top.
A place where the wind does not blow enough to collapse is good,
If you don't have a place such as a front door or a garage, you can lay an elephant underneath and lean against it to absorb rainwater.
Kawaguchi: "I think it's better to wipe off the water with a towel and then dry it in the shade. (Although I only dry it in the shade)."
Japanese umbrellas do not soak in rain, but rather than being water repellent, they are waterproof so that the rainwater blends into the surface of the umbrella.
Let it dry overnight, and when you feel it's crisp to the touch, it's done.
Parasols do not support rain, so if they get wet, let them dry completely before folding them. 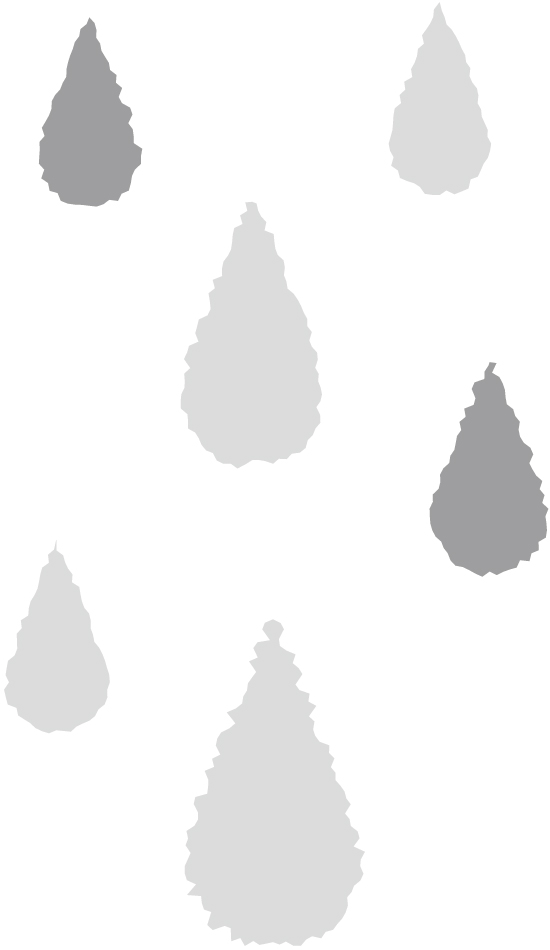 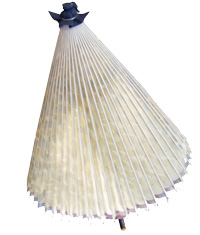 Do not put it in a box and take good care of it. First, remove the tightening ring and hang it in a well-ventilated place for storage.
Mold may grow in humid places.
If you do not use it for a while, the oil may harden and the Japanese paper may stick together and become difficult to separate. Do not try to open it forcibly, but use warm air from a hair dryer, etc., so open it slowly while turning your hand.
In particular, avoid leaving the umbrella in a hot place such as in a car in the summer for a long time as the oil will melt and harden easily.
The oil gradually becomes yellowish, but if you enjoy it as a texture, or if you are interested, if you choose an umbrella with a yellow or yellow-green color from the beginning, it will not be noticeable.

At convenience stores and supermarketsCan you put it in an umbrella stand?By bus or trainHow do you have 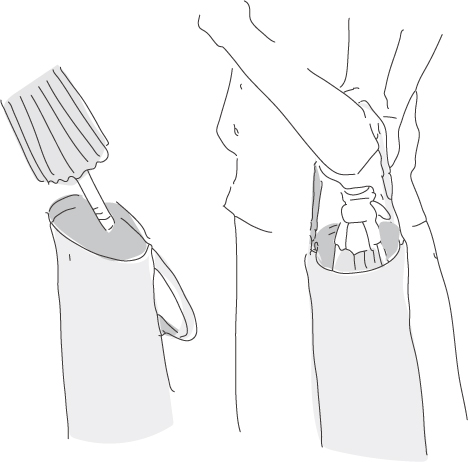 Escape from amateurs!How to hold it cleanlyHow to take a picture? 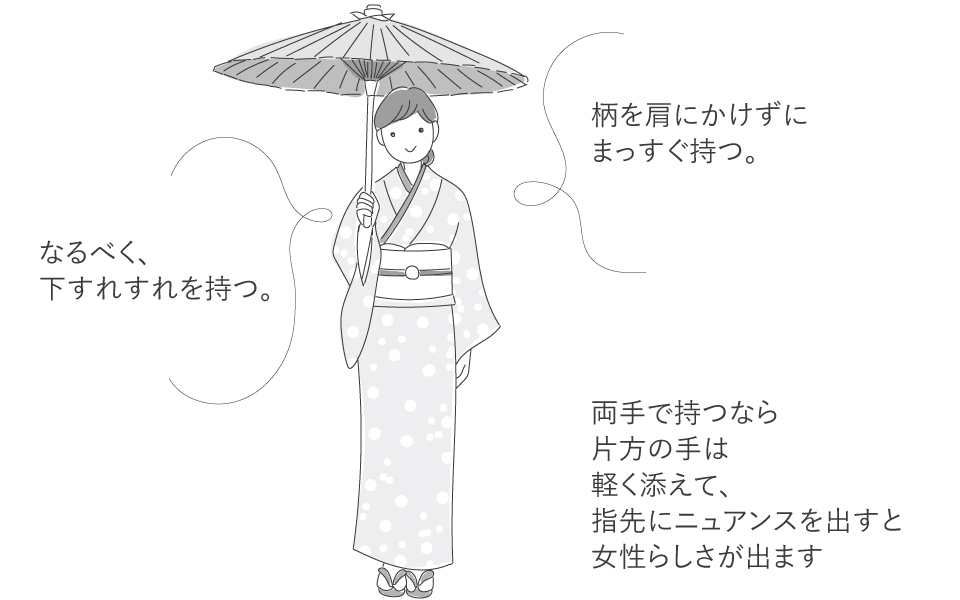 In the photos in this article, I have a lot of patterns on my shoulders, but since I can see many patterns of umbrellas, I can see many pictures held diagonally like Kabuki actors.
If you're not used to it, Japanese umbrellas are heavier than Western umbrellas, so you just put them on your shoulders.
However, when I look at the picture of a geisha and maiko holding a Japanese umbrella, I always hold the handle straight without hanging it on my shoulder. 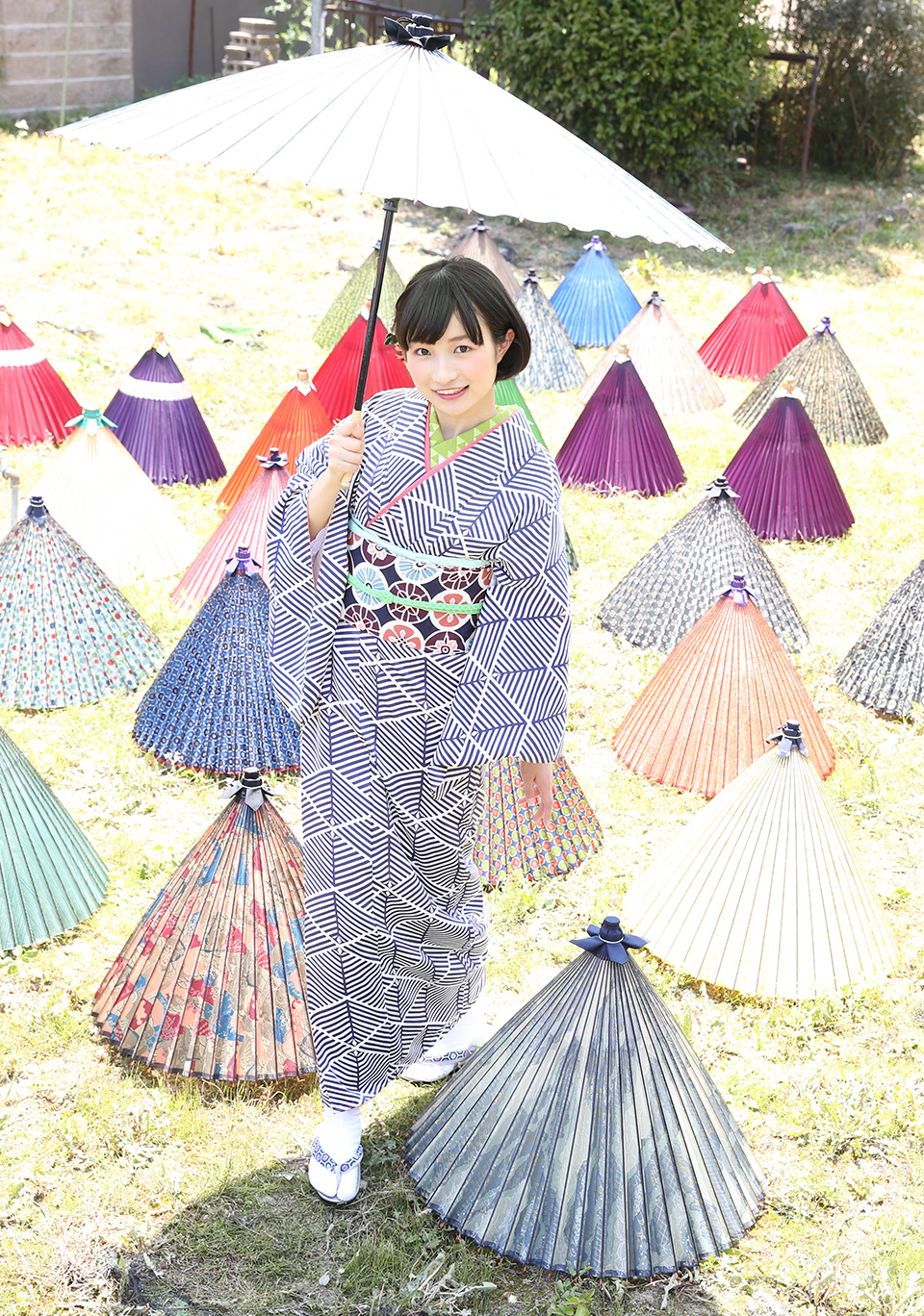 For those who find it heavy and difficult to hold straight, a parasol like the one in the photo is one size smaller and can be lighter.
In addition, small umbrellas such as small snake eyes and small umbrellas are also made. 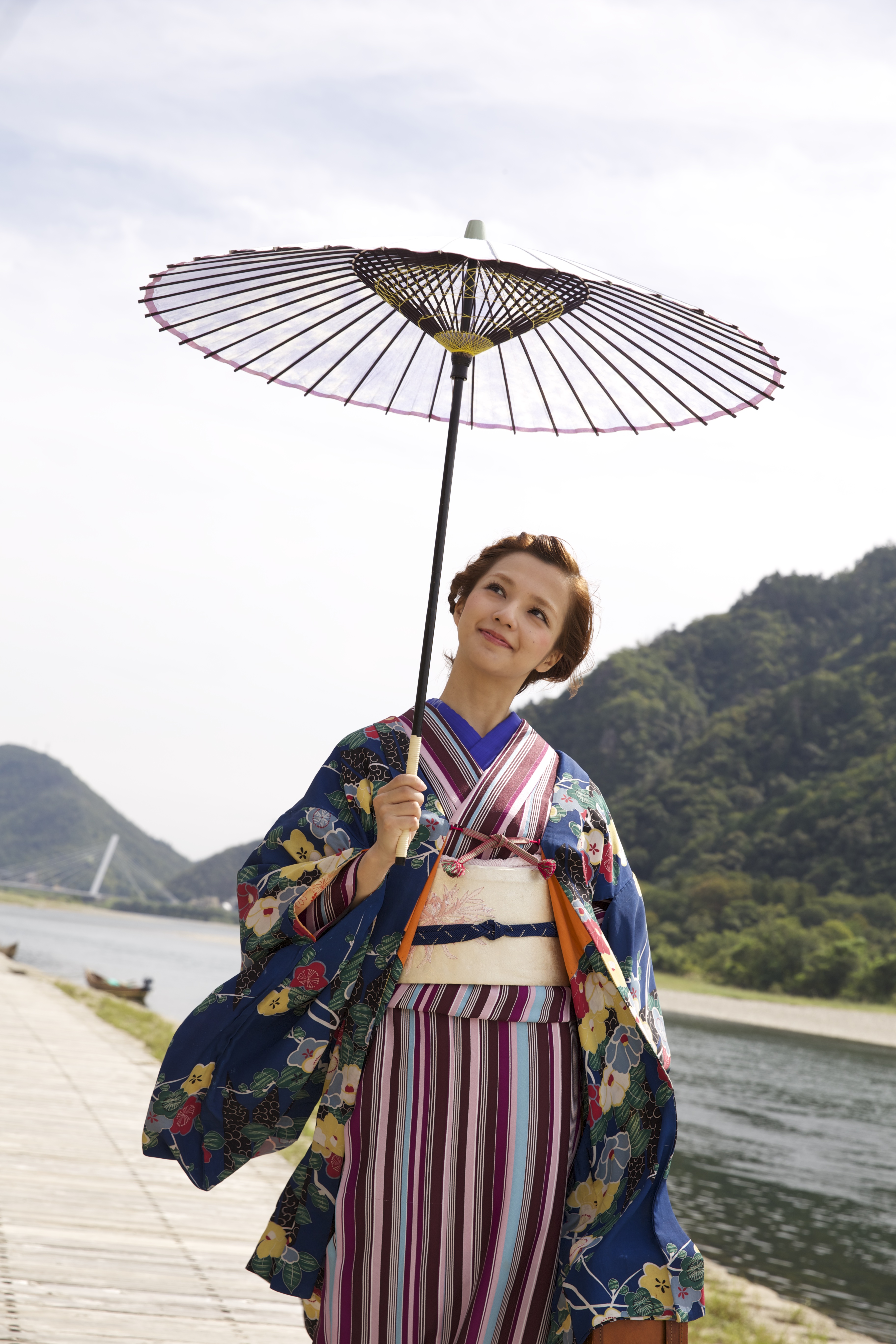 Do you know the etiquette "Umbrella Kashige" that prevents rain and dew from getting on the other person by tilting the umbrella slightly to the opposite side when people who are holding umbrellas pass each other on a narrow road? It is called Edo gesture, but I will not touch on whether it is a manner that has existed since the Edo period because there are various theories.
However, if you feel a little compassion for the other person like this, you will be more likely to become a Japanese beauty with a Japanese umbrella.

By the way, the Japanese umbrellaHow much is it?

There is also a beautiful Japanese umbrella that reflects the new sensibility of young craftsmen who are trying hard to inherit the tradition.
It will surely suit young people. 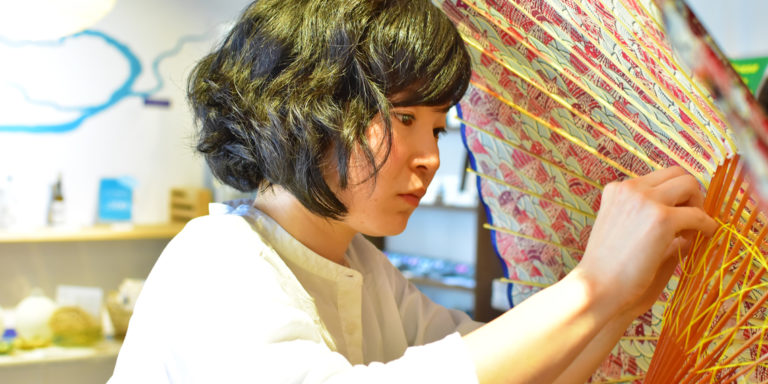 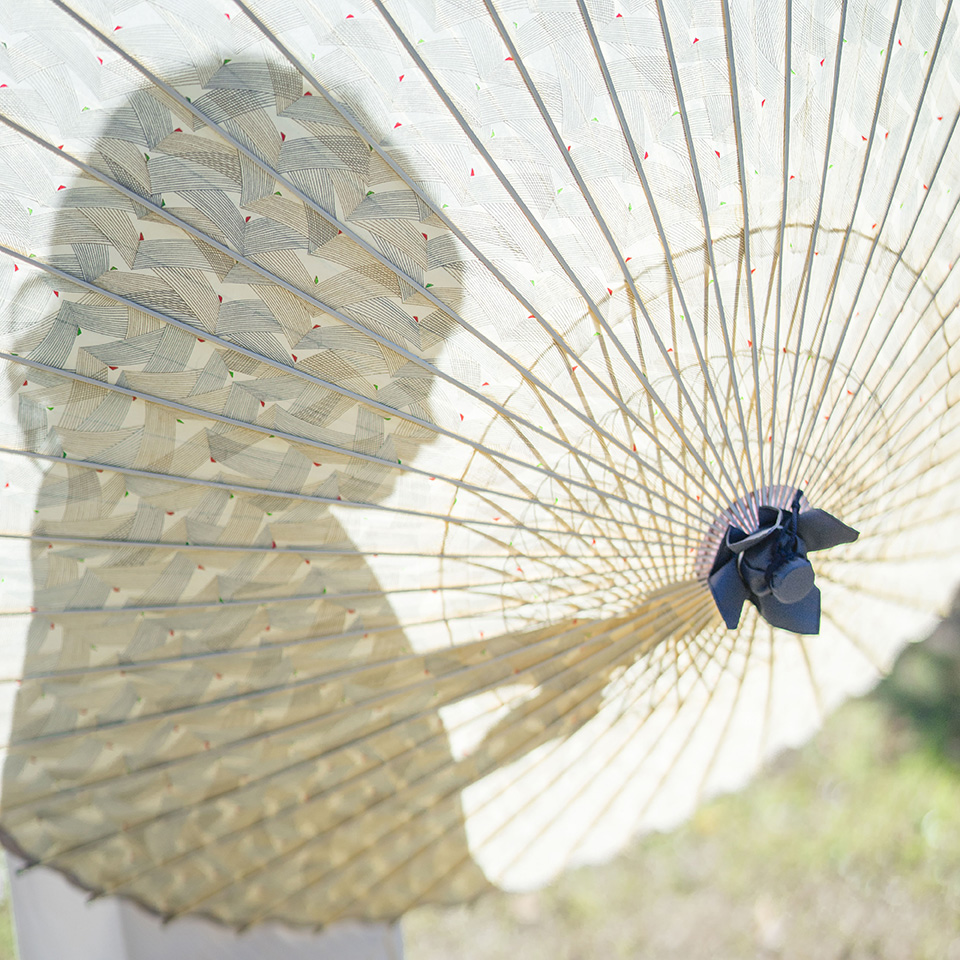 I've written it for a long time, but it was originally used in Japanese daily life as a tool for daily life.
The number of people who are fascinated by Japanese umbrellas is increasing.
Kawaguchi: "Don't be clumsy, feel free to use it. Even if you don't use it and store it carefully, it will deteriorate little by little because it is a natural material.
If you use it carefully, it will last longer than expected. There are individual differences, so I can't say that it will last for 10 years.
If the washi paper is torn a little, you can close it by sticking a small washi paper to close the hole in the shoji.

Since young staff sell Japanese umbrellas, the threshold for buying Japanese umbrellas may be low.
If you don't understand, please ask me anything.
We also give bookmarks on how to use it to those who purchase it. "